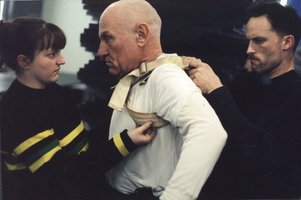 BIO
Kristin Schattenfield-Rein grew up the youngest of seven children in the suburbs of Washington D.C. where Kristin's family exposed her to a wide array of arts and culture. As a teenager, she was immersed in the subculture of D.C.’s underground punk rock scene, as well as studying classical painting and drawing at the Corcoran Museum of Art.

Having studied fine art with Judy Pfaff, Amy Sillman and William Tucker at Bard College, Kristin moved to New York City in 2000, where she went on to work as Matthew Barney's production manager on his Cremaster Cycle.

Kristin's current artistic process began to take shape after having two children. Thought of as a process maker, the act of making the work is as important as the final result. She creates a form of painting with different mediums that produce a layered reticulative effect. The work is creating dynamic structures of growth, building, and the ideas of creation. Her latest work is concentrated on materials new to her, mainly epoxy resin, glass, sand, graphite flake and silvered tar. The 2 dimensional work is becoming more textured and moves into hanging sculpture. The current pieces adhere – just barely – to the convention of wall hangings, they creep past their edges, becoming sculptural and suggestive of something beyond the obvious. The work is layer upon layer of varying materials adding and subtracting until a moment of grace is achieved. Kristin is forever pushing her work further by experimenting and creating new techniques, while honoring the techniques of the past. She currently lives & works in Philadelphia with her husband andtwo children.